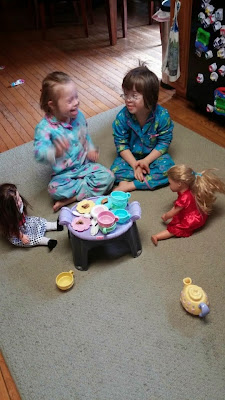 Surgery went well for both girls.

Alayna just had tubes placed and Dariya had tubes and an adenoidectomy.  Alayna came out of surgery second and was quick to wake up and ask about Dariya.  Dariya was still sleeping in the bed next to Alayna and was very groggy after anesthesia.

Late Monday night Dariya had a rash on her face and was breathing like she was Darth Vadar.  Not sure what she was allergic to but, thankfully after rest, benedryl and an advil she was back to her normal self.

Overall they have had an easy recovery and are definitely hearing better.  They both rang in the New Year at 6pm  (English time Zone) and were too tired to party any longer.

Today Alayna decided their doll's had birthdays so we had to have a tea party to celebrate.

Hoping they get rested and back to 100% before school starts again on Tuesday.

Posted by Rochelle at 3:15 PM
Email ThisBlogThis!Share to TwitterShare to FacebookShare to Pinterest

Hello Everybody,
My name is Mrs Sharon Sim. I live in Singapore and i am a happy woman today? and i told my self that any lender that rescue my family from our poor situation, i will refer any person that is looking for loan to him, he gave me happiness to me and my family, i was in need of a loan of $250,000.00 to start my life all over as i am a single mother with 3 kids I met this honest and GOD fearing man loan lender that help me with a loan of $250,000.00 SG. Dollar, he is a GOD fearing man, if you are in need of loan and you will pay back the loan please contact him tell him that is Mrs Sharon, that refer you to him. contact Dr Purva Pius, call/whats-App Contact Number +918929509036 via email:(urgentloan22@gmail.com) Thank you.