Ok, Ok forget about the drum roll we have a baby roll.

Alayna surprised us all today when she rolled over from her tummy to back. I was trying to get in some tummy time with her this evening and she just kicked her chunky leg up and pushed herself over not once, not twice, yes folks THREE times in a row.

She has been working on rolling back to tummy since she came home from the hospital so we were super shocked when she pulled this one out of her trick bag.

It is so much fun to watch her experience everything and doing new things each week.

Her physical therapist, Erin was really impressed with how much Alayna had mastered skills that we were starting last week like pulling her arms underneath her to raise herself up without support, holding her head steadier (it's not steady yet but wow what a difference just a week makes), and reaching for toys while laying on her side without support.

Alayna definitely isn't going to lay around and let the world pass her by. This girl is a go getter. I am sure she gets that from her big brother.

We learned at school this week that we need to lift Alayna up from the hips for diaper changes (not at the feet as you do with a typical child), try doing that while changing a big poopie diaper...lift her at the shoulders to give her extra support (not at the arms) and not carry her on our hip (or around a big tummies as some of the men in our lives forget. I won't mention ANY names) as these all stretch out her already loose hips, which would make crawling and walking more difficult later. Also, we are to carry her with her legs straight to help her get the idea that her knees must work in line with her hips (not froggy style). 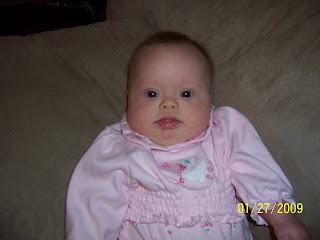 Just in case you missed the swimsuit thighs last week and are concerned Alayna might not be getting enough to eat check out these chubby cheeks!

Posted by Rochelle at 9:22 PM
Email ThisBlogThis!Share to TwitterShare to FacebookShare to Pinterest

So you didn't tell me that she rolled over! Wow! Maybe she heard your comment about her chunky thighs and decided to try to work it off... :)

I absolutely loved the Aidan and Alayna video. So sweet.

I may just come over next week for a baby fix to see her new tricks. Hoping she'll smile for me again. Or, better yet -- LAUGH!

My mom finally sent me the link to the blog, so I've been trying to catch up. Alayna is such a beautiful little girl, and how lucky to have such a great big brother. You guys are constantly in our prayers.

Much love from the Gustafson's.