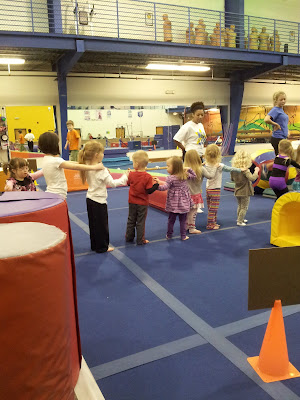 The girls were invited to their first birthday party this weekend by one their preschool classmates.  They invited the whole class so we knew it would be a great environment as the kids are familiar with the girls.

The party was at a rec center and they had all kinds of gymnastic equipment for the kids to play on.  Both girls dug their heels in and didn't want to participate when they saw the kids stretching and running backwards.

Thankfully, they warmed up quickly (within a couple minutes) and were out doing somersaults and crawling through tunnels with all their peers.  One of the workers was awesome with the girls and tried to include them in everything.

Alayna was such a cheerleader, she posed herself on top of one of the tumbling mats and was cheering each of her classmates on as they climbed over.  Both girls even jumped on the trampoline and jumped into the foam pit, which was super hard to climb out of.

Surprisingly, Dariya was the clingy one and didn't want to get too far away from me.  One little girl (not from their class) made a mean remark about Dariya, "She is creeping me out!" and ran away from her.

Seriously what 5 year old says that?  Usually I always have words to say when something like this comes up but, today I didn't think fast enough. I should have told her that Dariya is a little girl just like her and she has feelings too and that wasn't very nice.

As bad luck would have it as all the kids made their way to the table for cupcakes and ice cream the last two seats were at the end of the table so Alayna sat on one side and Dariya sat on the other side, right next to the girl that made this comment.

This little girl started to cry and her mother came over and said to me, "oh she is upset that she can't sit next to the birthday girl".  Then the mother said look you can make a new friend and pointed at Dariya.  The little girl turned her back on Dariya and said, "No".   Unfortunately, the mother didn't take this moment to help her daughter be kind.   I know that there will always be people like this.

I won't lie and say my heart didn't sink a bit with this girl's and mother's behavior and I was so thankful that Dariya wasn't paying any bit of attention to it.  If this girl had done this to Alayna she would have been crushed.

Overall, the girls had a fabulous time at the party.  We take the small bumps in the road as just that and move on.
Posted by Rochelle at 7:45 PM
Email ThisBlogThis!Share to TwitterShare to FacebookShare to Pinterest

One thing I appreciate about inclusive preschool classrooms is that "typical" children get to find out that every child is different (regardless of whether that child has a disability!). Before the walls of fear can be built, children learn to love and care for each other as they are, as well as help them grow-and grow in the process themselves!
So sorry you had to experience that; but it sounds like the girls had a wonderful time nonetheless!

Sorry to hear about your experience. Sounds like the girls had a great time though! Great PT! :-)