It has been a busy week meeting teachers, dropping off supplies and getting back into the school routine.  Aidan began school on Wednesday and likes his teacher and is looking forward to what 4th grade holds for him.

Seriously, what happened to my little boy??? 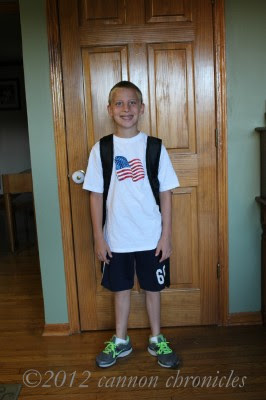 The girls were so excited to start back to preschool.  When I put Dariya to bed last night I told her she was going to school in the morning she literally dove into her bed and went to sleep.  LOL

We were a little off when the bus showed up yesterday morning.  Dariya was naked and Alayna was still in her pajamas.  I was questioning my sanity for a moment.  I thought I had lost track of the days.  Whew, it was Thursday and the girls only go on MWF mornings!  Thankful it was their mistake and not mine. 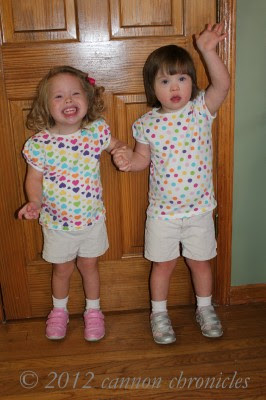 However, Alayna woke up bright and early at 6am and was determined to try her best to get everyone up.  Thankfully Dariya went back to sleep until 7.  They were dressed and ready about 30 minutes early.   They sat at the window as long as they could getting more and more excited.  When they finally saw a bus coming down the street they were VERY disappointed that it was Aidan's instead of theirs.  Last year the girls were picked up a few minutes before him.

But, not too soon after another yellow magic bus arrived and whisked the big girls off to school.  No tears this year, just giggles and lots of waving and kisses being thrown my way.

When they arrived home they were thrilled to tell me about their day and that Alayna was the special helper.

Report has it that everyone had a good first week (if you subtract out the throwing toys...Alayna!)

Praying the rest of the year they all soar!
Posted by Rochelle at 8:17 PM
Email ThisBlogThis!Share to TwitterShare to FacebookShare to Pinterest

It all goes by WAY too fast doesn't it? My "little" boy will be in 8th grade this year. I get a little tears thinking about it.

The girls are adorable. So glad they are enjoying school.