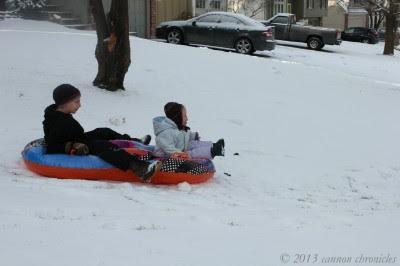 As we have had more snow in one or two snowfalls than we had all winter last year we thought we should get the girls out to play in it.  We didn't stay up until midnight to ring in the new year so we were all up early on New Years day so we bundled up and headed out front for some fun.

Dariya, we are sure had never been allowed out of the orphanage during the winter months so while they had plenty of snow in Ukraine I am sure she never played in it.

We weren't sure what she would think but, it didn't take too long to figure out she is a winter sport kinda girl!
She loved sledding in the front yard, making snow angels, tasting it (good thing the dogs live in the backyard LOL), and playing, playing, playing.

Alayna was the first to give up as her hands got too cold and eventually the other two came in and joined her near the heater.

What a great way to bring in the New Year.

I do so love these three... 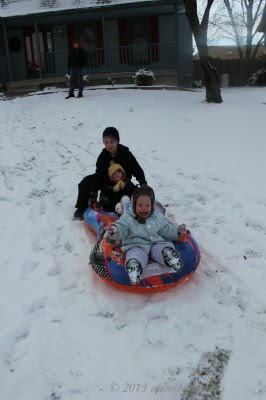 Posted by Rochelle at 2:14 PM
Email ThisBlogThis!Share to TwitterShare to FacebookShare to Pinterest

Those smiles are adorable! And how fun you can sled in your own front yard! I'm glad you are getting some snow this winter, though probably not as much as the U.P. :-) We've got a good amount here.

Looks like they had a blast! We've only had a couple of dustings down here so far :( Addy has never like the snow but every year I'm hopeful!

What fun! We can't wait to get our first snow of the season. Hopefully our boys enjoy it as much as your kids did.