We showed up for Alayna's sleep study and were blessed to have, Jenny the same tech that had Dariya last week.  She had goldfish crackers and cookies waiting for Alayna (and some to bring home to Aidan and Dariya).  Talk about spoiled! 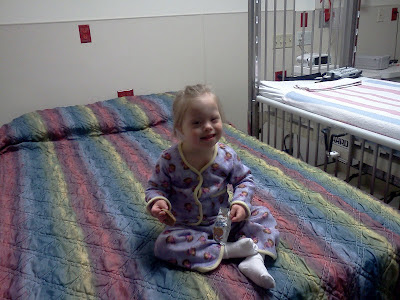 We also were blessed with another tech not having a patient until 9pm so both worked quickly to get the probes attached in no time.  Alayna was a ROCK STAR for the setup.  She sweetly sat in the crib and watched Signing Time, ate her goldfish and entertained the two techs and the family service person (who was supposed to be there to entertain her if needed.)  The family service gal said, "WOW Alayna you made my job easy tonight!"

When she had all her gear on (and looked like she had been in a car accident) she happily smiled for the camera and then quickly went to sleep with just a short rock with me... 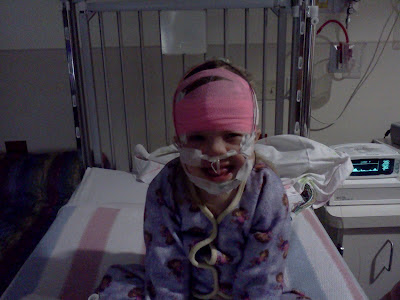 She slept well from 9 to about 2:30 then didn't sleep well after that.  She sat up and fell asleep numerous times.  Jenny had to come in and reattach some wires once and Alayna got tangled in the wire mess another time.  However, there was no coaxing her into laying down to sleep in the early morning hours, which she NEVER sleeps sitting up.
Thankfully Jenny said they got a good study on her and everything looked good.

Needless to say this sweet little pumpkin didn't make preschool today.
After arriving home around 8am and getting the rest of the crew off to school and work we had a leisurely breakfast and then it took me 45 minutes to get all the sticky stuff out of her hair.
We picked up Dariya after preschool (Alayna had to have at least a glimpse of her Ms. Juanita) had a quick lunch and I think she was asleep before I walked out of her room for her nap.
After Dariya's sleep study and food poisoning last week and Alayna's sleep study and strep this week I will be hiding under a rock for a few days to make sure I don't catch any other bugs that might have happened this way for next week!

Happy weekend!
Posted by Rochelle at 1:59 PM
Email ThisBlogThis!Share to TwitterShare to FacebookShare to Pinterest

I hate sleep studies! It looks like your experience wasn't too bad though. Lucas fought tooth and nail of course.

Sounds like you are one busy momma, get some rest!

Curl up nice and cozy under your rock! Sounds like you could use a rest :)

So glad the girls' sleep studies are finished now. You are one brave mama to do both of them two weeks in a row!