Aidan and I spent a couple days fishing last week while the girls were in preschool.  It has been a long time since he and I had numerous hours alone together and we both loved and cherished it.

Unfortunately, neither one of us is brave enough to put a worm on the hook (I do crickets, other bait and fish but NOT worms!  Don't even get me started on having to touch one to dissect it in biology class) so we used spinner bait and didn't catch a thing.  But, we had a blast.

Daddy to the rescue... he took Aidan and his buddy, Avery fishing on Sunday afternoon and within an hour they had caught 9 fish.  The boys were giddy as anything each time they reeled in their 1/4 ounce catch of the day.  We had to drag them away from the lake a little after 6pm because the girls were getting hungry and Dariya is a big grump when she is hungry.

Even though none of the fish were keepers that didn't stop us from having fun and enjoying the sunny day. 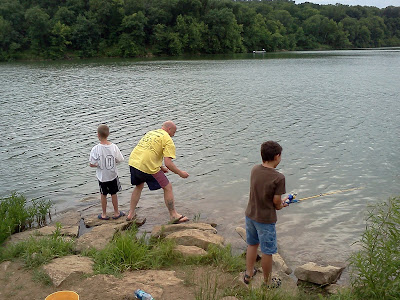 Prayers appreciated for Aidan on Tuesday morning he is having a couple baby teeth pulled that aren't wanting to come out and the orthodontist just can't work around them any longer.
Posted by Rochelle at 8:17 PM
Email ThisBlogThis!Share to TwitterShare to FacebookShare to Pinterest

Those times with your oldest are so special when you get them, aren't they? I'm looking forward to when Wesley's summer school starts and we can have some of those times too.

how fun! I will go with you guys sometime and put on the worms. :)