All kids go though the same developmental stages and we know Dariya was a bit behind not because of her down syndrome but rather because of living in an orphanage.
Thankfully, since being home she has soared and has blown us away this year with how fast she has picked everything up.  But, we can honestly say behaviorally that Dariya is enjoying the terrible 2's stage a little too much. 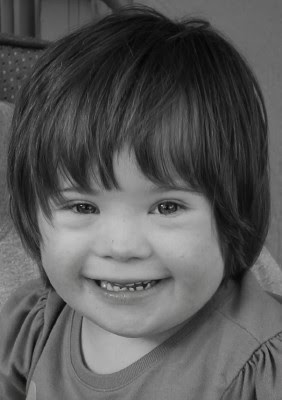 As of the last couple weeks, she has decided that anything and everything is a good target to attempt to flush.  We have lost a pair of socks, several books (they didn't go down but rather were too soaked to survive), many rolls of toilet paper,  numerous clothing articles have been rescued and she had my cell phone just inches from chucking it in when I caught her.  Thankfully, she knows stop and is obeying it and handed it over before any damage was done.

Then of course, there is potty training.  She is doing fabulously well and is keeping dry most days with gentle reminders to use the toilet.  However, she has decided that no peeing in your pull up or diaper means during nap time too so every day for a week I have found her wiggled out of her diaper (3 or 4 times sometimes) WITH duct tape around it and has peed in the bed, even when she has just gone before nap.  Ugh!

Oh and let's not forget the other morning when she was completely ready for preschool and went down to the kitchen and pulled Aidan's left over bowl of a bit of cereal and milk over on top of herself covering herself from head to toe with delicious cinnamon toast crunch and milk!  If it wasn't 3 minutes before the bus was to arrive and I didn't look like one of those cartoon characters about to blow their top I would have taken a picture.

She loves playing with Aidan and Alayna but, is still in that mainly side by side playing that toddlers do.  She doesn't engage with others yet, especially friends at school but, we are working on that.

Today marks the one year anniversary of when we began our journey to Ukraine to pick up Dariya.  Traveling nearly 24 hours with a stop in DC, Munich and finally arriving in Kiev.  I still am humbled that God chose us to be her parents.  She is such a sweet girl and fits in perfectly here with just enough added chaos to make life exciting.

We love you Dariya and celebrate how far you have come in just a year.  Now could you walk away from the toilet and move onto the next stage already?
Posted by Rochelle at 1:30 AM
Email ThisBlogThis!Share to TwitterShare to FacebookShare to Pinterest

Just pray nothing gets stuck in the toilet. The plumber paid his car note the day one of mine flushed a toy cell phone and it got stuck in the pipe just under the toilet.

I am not looking forward to TT with Josie B. Dariya's progress is encouraging.

I found your blog while you were in country with Dariya. I've enjoyed following your story. Thanks for keeping us posted! :)

Ah yes, the joys of the flushing stage... Every time something gets flushed, I pray that it will make it all the way through and we won't get stuck calling the plumber. Hopefully she will outgrow that soon!

It's amazing how much Dariya has grown up this year. I love seeing how far she's come and look forward to all that God has in store for her.

No way, I can't believe it's been a year already!!! I had to go back and look at my blog to double check. LOL Very fun reading those old posts. :-) It was wonderful to have spent time with you and Jason.

I'm sorry to hear about the flushing addiction! And getting out of a diaper w/ duct tape on?!? Oh my...you have a little Houdini on your hands!

Oh my goodness... This reminds me of when my Hope and Maddy were little. Everything went in the toilet, and I mean everything. Once we had to call 911 because they locked themselves in the laundry room, stripped naked, and were playing in paint they had pulled off the shelf. There was a dead bolt on the inside of the door so I couldn't get in. No I'm not kidding... They were 2 and 2 1/2. LOL!