Aidan has been waiting (impatiently, I might add) all summer for our Florida vacation and today is the day, it is finally here. We have packed everything and the kitchen sink, should keep 4 kids entertained on the plane, I pray!

Alayna is still bothered with those teeth. She is sleeping well at night but not napping well, poor thing wants just to cuddle and chew. Aidan's behavior has been CRAZY this week. I know it is the anxiety of the trip and school starting in a few weeks.

Please say a prayer for us as we travel today. Pray for great behavior from all 4 kids while we are gone (oh what am I talking about PLEASE pray for good behavior for them all the time). Pray for peaceful sleep for all kids and us so that we can truly enjoy each day that we are there.

I don't have a laptop so I will be offline until we return in August. I hope you have a great week while we are visiting Mickey & Minnie!

I will be sure to post some vacation pics that first week in August when we get settled in.

SUPER HUGE thanks to our sweet Heigele friends who not only loaned us but delivered to us their cool stroller and car seat bag for the airplane! You guys are the best!

Auf Wiedersehen, Cheerio, Au Revoir, Goodbye for now!
Posted by Rochelle at 12:27 AM 1 comment:
Email ThisBlogThis!Share to TwitterShare to FacebookShare to Pinterest

I am begging for Alayna's sweet little teeth (yes, that is plural) 2 little white caps are bearing in on the bottom but, the little buggers just won't come in!

She doesn't seem much worse for the wear except she is chewing on everyone (not everything). Today we stopped by to see Uncle Ed & Aunt Jane (Aunt Jane "the Queen of Spoiling" made autograph scrapbooks for the kids to take to Disney! Thanks Jane!) Alayna chewed on poor Uncle Ed the whole time we were there. When we arrived home she chewed on Aidan for a good 5 minutes before moving on to me...

Today at lunch Alayna was fussing even at mangoes (now this girl doesn't fuss ESPECIALLY at mealtime). Then at dinner she cried again at everything except cold applesauce. You know us Cannons we are not picky eaters so for someone to be fussing during a meal time in our house it must be some serious tooth business.

Overall, she is doing well with the whole teething process, we just wish the only one playing peekaboo in our house was Alayna not her teeth.

I have to say though I love her gummy smile and will miss it when the teeth finally arrive. Guess I should get out the camera and take more pictures!
Posted by Rochelle at 7:33 PM 1 comment:
Email ThisBlogThis!Share to TwitterShare to FacebookShare to Pinterest 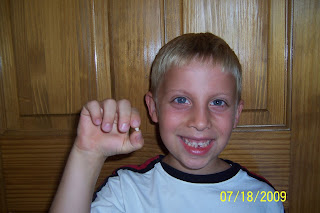 Oh boy, we are SO excited at our household (ok, maybe the 6 year old is excited enough for all of us).
Today while we were grabbing a few items at
Wal Mart, Aidan wiggled his tooth right out...He was EXCSTATIC!!! to say the least. For the next hour we heard the play by play of how he got it to come out, how strange it feels, and he is so glad to finally have lost his tooth like his cousin and friends.
He who told me early in the summer we were NOT having a tooth competition as it isn't nice to put brother and sister up against each other (good point son) today happily announced, "I WIN". I reminded him it wasn't a competition but, there was no convincing him of that. Of course, I didn't inform him that Alayna's tooth has been playing peek a boo for a couple weeks, it comes to the gum line then goes back under. I know that if she would have had hers in first it would NOT have been a competition!
He, of course, doesn't believe in the tooth fairy but he thought he would like the money for spending in Florida next week so he thought he would try it out and put his tooth under his pillow. He has a silver tooth box that was given to him when he was born by a dear friend, Linda Willis (one of my teachers in Arkansas). He asked me to ask the tooth fairy if we could keep the tooth and put it in the box and still get the money. I assured him that the tooth fairy probably could work out something. HA!
It was a beautiful day here ...near 80! We spent most of the day outside and even set up the bounce house for Aidan and his buddies to bounce off some energy. The video was taken this evening after we put the bounce house up....Daddy and Alayna were enjoying the nice weather and the crinkly tarp!

Jason & I celebrated our 8th anniversary this week! I am truly blessed by a great husband! (Don't tell him I said so as his head will swell!)

We survived VBS this week. We all really had a great time at Crocodile Dock but, we are very tired!

We are going to use this next week to rest up for our trip to Disney next Saturday. Aidan has been packing for months now (I guess I should go and see what is in his carry on...probably everything AND the kitchen sink.)

Update: When Aidan got up on Sunday morning and found money and a sweet note from the tooth fairy he said, "WOW I didn't believe in the tooth fairy but, now I do that is pretty cool she brought me money. I think I will try that with all my teeth" Super cute!

Posted by Rochelle at 7:53 PM 2 comments:
Email ThisBlogThis!Share to TwitterShare to FacebookShare to Pinterest

We have had a great weekend...on Saturday, Aidan tried out for the UPWARD soccer team. He will begin practicing and having games in August. He was SO excited when he finished his tryout and wanted the season to begin immediately. He looks so cute in his little cleats and shin guards. (Will post pics in August when he gets his full kit).

Yesterday, our church kicked off the VBS program with a super fun carnival and the opening night of VBS. Jason is leading one of the kindergarten crews and I am co-teaching the Bible story to the preschoolers (my dear friend, Courtney is taking turns with me...bless her so I don't have to be at the church 5 nights in a row with Alayna). My girl is definitely scheduled and likes to be asleep in bed by 7 pm.
Today we had baby class which was fun. In music class, we played the drums and rain makers then we went to speech class and worked on oral motor skills then for OT we got to get into the pool and swim around (Alayna loved floating around on her back she is such a water baby!) 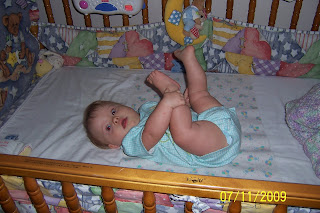 The highlight of the week for Alayna is that her legs have finally gotten long enough that she can get her sweet little toes in her mouth. Oh, the simple pleasures of life.
She is getting really good at her pincher grasp and is able to pick up cheerios and puffs and self feed. She is pretty proud of herself once she gets one in her mouth she looks at you and waits with anticipation for her applause. Oh what a ham (she gets that from her daddy!)

Posted by Rochelle at 7:10 PM No comments:
Email ThisBlogThis!Share to TwitterShare to FacebookShare to Pinterest 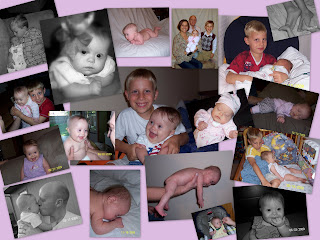 Today we celebrate 9 wonderful months with Alayna Faith.
She is feeling much better and had her 9 month check up (no shots included this time, which she was happy to hear). She is weighing in at 15 pounds 12 oz. which is the 55%, and she is 25 1/4 inches long which is the 20%.

She continues to amaze us with all the fun new things she is learning. She loves sleeping on her side, sitting up, reading books and playing. She also likes to get up on her hands and knees then lunge herself forward to get somewhere. She is working on finger feeding, obviously she is having no trouble getting it to her mouth.
Posted by Rochelle at 1:51 PM No comments:
Email ThisBlogThis!Share to TwitterShare to FacebookShare to Pinterest

And the diagnosis is...

We went to see Dr. Rozina on Monday afternoon (of course Alayna wasn't running a fever anymore and then showed off on the exam table by getting up on her hands and knees!)

Dr. Rozina checked her for an ear infection and said that she looked great. She didn't want to do blood work as Alayna was obviously on the mend.

She told us to look for a rash that would give us the diagnosis of Roseola. Good call Dr. Rozina...today Alayna has a mild rash. Thankfully she isn't feeling bad and is definitely getting back to her normal, playful, happy self. Hopefully the rash disappears as quickly as it came and we can get back to life as normal.
Posted by Rochelle at 8:14 PM No comments:
Email ThisBlogThis!Share to TwitterShare to FacebookShare to Pinterest 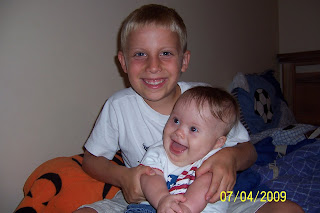 Happy 4th of July from us to you....
On Friday, Alayna just wasn't her normal happy go lucky self. I could hardly get a smile out of her all day, in fact. After dinner I noticed her head was feeling warm so I took her temperature and she was running a fever (first fever in almost 9 months!).
I thought it could be that tooth she is working so hard to get in but, it was higher than a low grade fever. She ran a fever all yesterday and was just slumpy all day so we didn't venture out for fireworks. I tried to get a picture of she & Aidan in their flag shirts early in the day and she let me know she wasn't up for pictures. I set her on Aidan and she immediately started to cry. However, by last night she was feeling better and let me catch a few good shots of them smiling together.
Jason, the ever calm parent when our children are ill or hurt (she says sarcastically) wanted to rush her to the ER (bless him he is a great dad). Needless to say I talked some sense into him and we just gave her the motrin and let the fever run its course.
Looks like we will miss our friends at baby class tomorrow as she won't be 24 hours without a fever.
Posted by Rochelle at 11:24 AM No comments:
Email ThisBlogThis!Share to TwitterShare to FacebookShare to Pinterest

Aidan finished up his swimming lessons this week and made huge progress from last summer. It was so much fun to watch him gliding across the pool. Here he is preparing to jump in as the water was super cold.

The fans gathered on the pool deck to cheer he & Grace on.
It was way too cold for Alayna to get in so she sat out with Uncle Scott & Rayne. Aunt Elise & I were crazy cheerleaders from the sideline.


TOOTH UPDATE:
Many of you have been on the edge of your seats as we have awaiting the results of our summer tooth adventure....Last weekend while nursing Alayna I felt a sharp edge...her bottom tooth is almost in, you can feel it and see it but it hasn't broken the gum yet. Aidan's bottom teeth are very wiggly, jiggly but are still hanging in there. I just know they are going to loose/gain their teeth the very same day. 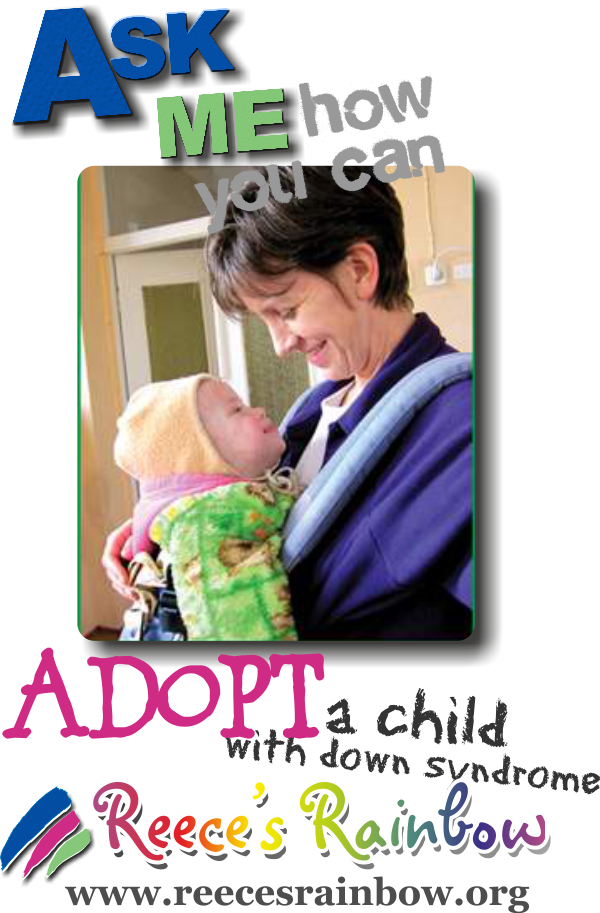 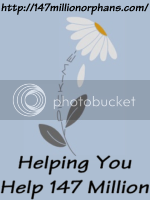