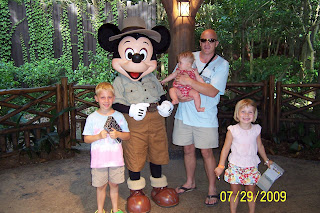 Goofy & Pluto were extra goofy and played around with everyone quite a while. Rayne wasn't too sure of them and popped Pluto right in the nose! OUCH! 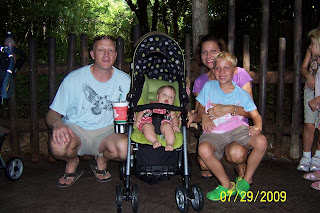 We walked all the nature trails before going on the safari, which was really cool. 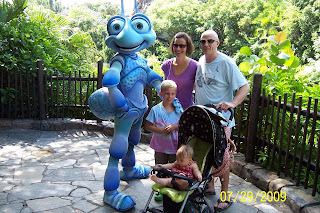 Flik played around with Aidan & Alayna for a while. She really wanted to chew on his big buggy fingers! I think he would have let her if her germaphobic mother wouldn't have stepped in and stopped the fun.
(Finally, the tip of her tooth has broken the gum line. You can't see it but you can feel it. I hope for her sake that all her other teeth don't take as long to come in. Her gum looks like a volcano ready to erupt, all swollen and red.)
We all LOVED the Lion King show which I don't have pictures of yet. Elise took all the pictures during the show as I was too busy trying to keep Alayna from jumping off my lap and drooling all over me. She was so excited about the music, dancing, acrobatics and characters.

Posted by Rochelle at 6:46 PM
Email ThisBlogThis!Share to TwitterShare to FacebookShare to Pinterest