Do you hear what I hear?

Today the girls had their biannual ENT appointment to check their tubes and hearing.  Hey, we met our deductible why not cram in every ologist I can think of before the end of the month?

We haven't been so successful in getting a good hearing test yet on Dariya so I was more than anxious to hold her down get it done.

Thankfully the girls were angelic!  Alayna was on her game for sure.  We stopped at the lab and had her thyroid labs completed.  She never winced or cried just sang the girls jingle bells while they worked.

Quick dash down the hall to ENT and we were whisked away into an exam room in no time.  Thankfully with iPad in tow and a little Sesame Street to keep them occupied the girls were very good.  Alayna went first and had a bunch of wax they cleaned out and had a good hearing screening plus her tubes are still in.

Then I dreaded having to get the Ukrainian Tasmanian devil into the chair.  To my surprise she only grumbled a little bit then stopped.  She let them put the little things in her ears and sat quietly (I guess little sister's role modeling paid off).  She grumbled a few times and reached to pull them out once but otherwise was fabulous!  A far cry from the drama that ensued 6 month ago when we went to the audiologist.  She had some wax build up (she did throw a bit of a fit for the wax cleaning but WAAAAY better than normal), tubes looked good and her hearing was normal on the right and the stats looked slightly diminished on the left ear but nothing to be alarmed about.  We won't be able to get accurate and specific levels until she can wear the headphones and sit in the booth which might be a year or so away so until then we will take what victories we can get.

Afterwards we hunted down our favorite UPS man to show off our super cool Santa band aid (Alayna) then hurried home for ice cream with sprinkles to celebrate the day! 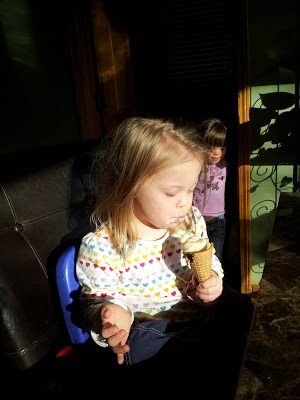 Posted by Rochelle at 6:39 PM
Email ThisBlogThis!Share to TwitterShare to FacebookShare to Pinterest

So glad to hear everything went so well!! Yay for good visits!

That's great BOTH girls did so well! What a difference 6 months makes, huh? Elijah did great with his hearing and eye tests the past week too. Big improvement, that's for sure! J is next...he's developed quite the 'tude as of late, so I'm not expecting great things...