What is so "down" about down syndrome?

If you have been following our family you know we think there is absolutely nothing "down" about down syndrome.

So what is up with the name?     Seriously couldn't they have called it... Cool syndrome?  Rock Star syndrome,  Or maybe we are more alike than different syndrome?

Dariya really wanted to know where the name down syndrome came from so we did some research. 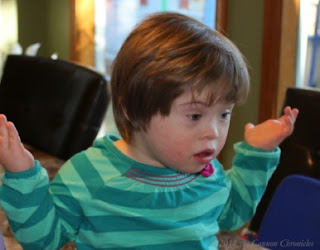 John Langdon Down was born in Cornwall England in 1828.  At 25 he entered medical school, and after graduation he became an early advocate for humane treatment and therapy for the mentally handicapped.

He served as medical superintendent at the Royal Earlswood Asylum in Surrey, England, where he wrote the first paper identifying common traits among patients afflicted with what came to be called "Mongoloidism".
In 1958, French geneticist , Jérôme Lejeune discovered that Down syndrome was caused by an extra chromosome on the 21st pair. The French Academy of Sciences published his scientific work on January 26, 1959. For the first time in world history, his discovery established a link between an intellectual disability and a chromosomal abnormality.

In 1961 the editor of the British medical journal The Lancet proposed that the condition be renamed Down's Syndrome.  In 1965 the World Health Organization redesignated the name to Down Syndrome. 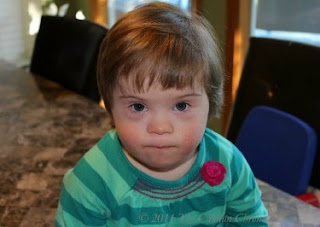 After studying all the research materials Dariya wanted to let you know that we aren't "down" because we have 3, 21st chromosomes, we are just extra cute! 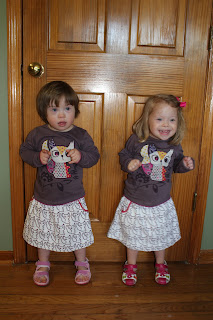 Don't forget about the Fristoe's iPad2 & iPod touch giveaway it ends this SATURDAY October 8th at midnight and they are still needing over $16,000 to bring Clare home.  Please, please, please go over and donate $10 and beg your friends to do the same.
Posted by Rochelle at 8:55 AM
Email ThisBlogThis!Share to TwitterShare to FacebookShare to Pinterest

Maybe we could rename it, I'm Down wid it Syndrome... too gangsta? Ok, I'll keep thinking, whatever you call it, I love it, love you, love your girls!!

And to think of all the names this guy could have had, it had to Down.

Your girls are sooo cute. I love seeing them together.

Love those pictures - keep them coming!

Wish the name didn't have such a negative connotation...but I keep thinking that it could've been worse.

On a positive note - the girls are adorable in their matching outfits! :)

Oh your girls are so cute together! And I love Dariya's questioning face. She looks so sincere.

Your girls are so cute, and their matching outfits are adorable.