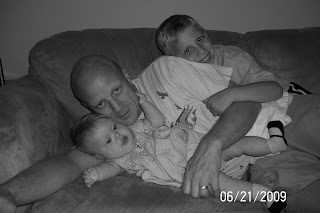 This week has certainly thrown us out of our hermit zone and back into the fast and furious world we usually live in.
We started the week out right at Kaw Prairie on Sunday...then we came home and had a family day for Father's Day. We invited Pop Pop over and made he and Jason steaks & shrimp to celebrate. Jason was in heaven with the giant cheesecake sampler (I bought)...(he and Aidan finished it off last night.) 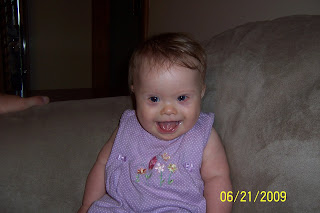 On Monday, Aidan started swimming lessons (he & Grace are in the same class, super fun to watch them become little dolphins). As there has been a heat advisory in effect all week here Grandma came by to keep Alayna in the cool while we went to the pool. When Aidan finished lessons we quickly came home, I fed Alayna and she and I were off to baby class for the afternoon. It was a fun class in which we learned about baby massage (oh the babies LOVED it) then in honor of the 4th of July they painted the kids feet red, white and blue and stamped them on paper like a flag. SO CUTE!

On Tuesday, we again went to swimming lessons, came home and re-showered because we were dripping wet from watching Aidan swim (and we were in the shade). UGH it's hot! Then we were off to Alayna's pt (her PT, Erin's daughter was sick last week so she rescheduled us for Tuesday). Alayna had only an hour morning nap and had just drifted off to sleep in the car when we arrived so I figured she would be like goo and not do much but she continues to surprise me. She gave Erin all she had.
She is sitting for several minutes on her own without propping on anything and moved from side sitting into all fours without much direction from Erin. Then she decided to reach out from all fours to get a toy! Go baby girl.
Finally, today we were able to slow things down a little and after Aidan's swimming lessons Alayna and I decided to join him in the pool. It was so hot and we were having so much fun we stayed for hours. Alayna even took a 30 minute nap laying on one of the deck lounges.
Needless to say after a few days of fast a furious we are all tired again. Alayna was counting sheep by 6:30 and Aidan wasn't too far behind her.
Jason is out tonight with the DADS group (Dads Appreciating Down Syndrome) they were going to the T Bones baseball game but as there is huge thunderstorm going on outside I bet they found the nearest pub and are staying dry!
Posted by Rochelle at 7:48 PM
Email ThisBlogThis!Share to TwitterShare to FacebookShare to Pinterest

hey! just wanted to check in! i can see things are abundantly busy and delightful at the C house as usual. :) miss you!

Alayna is a rock star! She needs to show Kelsey how to sit and transition! I am so happy for you.