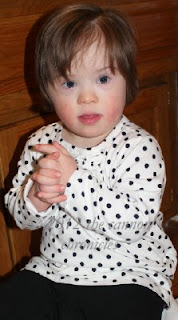 we got to the audiologists and Dariya didn't want to have anything to do with the equipment nor the two sweet ladies trying their best to entertain  her to make her be more cooperative and to get good hearing results. 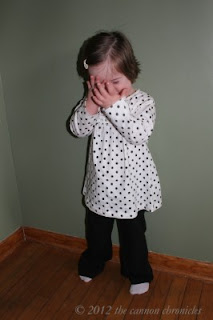 Dariya did allow them to do the sound booth test.  She responded well even to voice at a very low tones on both sides however, this test can only test her total hearing and response it can't pinpoint each ear nor tell us if there is any problems in one ear.

After the sound booth they tried to do the test with the probe in her ear and after about 15 minutes of fighting her we gave up.  We couldn't even get a response from her right ear in which we know has passed this same test just Friday.  She has to be still and quiet for this test, two things she was refusing to be today!

The conclusion of this audiologist is that she is hearing well overall, making great strides in language development and speech and is able to detect sounds with both ears at a minimal level.
Therefore, she is not overly concerned with her hearing.  She was honest in saying that she can't rule out hearing loss in her left ear until we get a good test on her.

She also stated that if Dariya had fluid behind her ears for a long time while she was in Ukraine (which she probably did) then it might take a while for her brain to recognize the signals that her left ear is sending her now that she has tubes and the eardrum is vibrating.   So waiting a few months to give her ears and brain a little more development time might help the situation.

We will proceed as usual and retest in 3 months and pray for someone to be cooperative.

Thanks for the prayers, we appreciate them all.


Good thing she is CUTE!
Posted by Rochelle at 1:39 PM
Email ThisBlogThis!Share to TwitterShare to FacebookShare to Pinterest

We have been through many a hearing test with David. I can SO appreciate how difficult that can be with an unwilling participant! Here's hoping that there is nothing to worry about when you go back. She sure is a cute little stinker!

Sounds like she's a girl after my own heart...I don't think I've ever made it through a doctors appointment without expressing my distate in whatever the age appropriate way was at the time.

Sorry the test didn't go well, but glad to hear they think she is doing so great! She sure is a cutie...love these pics of her!

I am IN LOVE with that last picture. How stinkin' cute!